Weather-wise this past week ended on a high note. Friday’s afternoon temperatures stretched upwards to forty-five degrees under sunny skies. The weather promising to extend into the weekend, I woke early on Saturday morning. Lunch packed, my husband and I were soon on route to the Fertile Sands Hills anxious to experience what the day might bring.

Crossing the Clearwater River at Red Lake Falls, we followed the highway south catching sight of a mature bald eagle perched high in its tree. Not long thereafter a second eagle soared aloft over an open field. Farther south, a third eagle hunted in the grassland not far from the road. The vast acreage gave way to smaller fields edged by aspen, box elder and slippery elm or lined by willows and great lengths of spruce. On an eastern ridgeline, an eagle’s nest lay hugely in the forked branches of a solitary tree. My husband and I spoke of decades within memory when eagles were not so plentiful, when because of decreasing habitat and use of DDT, eagles had nearly disappeared. Listed as an endangered species in 1967, fifty years later their numbers had rebounded. Still, each eagle sighting has remained for me a wondrous occurrence – not unlike glimpsing a woodpecker working its tree or a goldfinch darting in-and-out of a late summer soybean field…or yesterday’s trio of magpies flying brigade-like across a county road white epaulettes on full display.

Years ago when canoeing the Red River north to Selkirk, Manitoba, I heard the successive splashes of a beaver family exiting their den in the river bank and dropping into the water for an afternoon swim. Who experiences something like that and remains unchanged! I remember eaglets peering over the edge of their nest as the canoe passed beneath. I remember the slap of fish as they jumped into the air and hit the water on re-entry. Paddling along the Red River I saw hawks hunting high above the river forest. I saw kingfishers dive from branches. I sat as swallows swooped and careened around me in their graceful ballet.

Like grouse wings imprinted on the January landscape or coyote tracks wending their way through the shrubline to trail off across a frozen field – like eagles perched on cottonwood branches, or as in the Sand Hills, the outlines of damaged oaks standing starkly against the winter snow – these are wondrous sights. To be their witness is to be enriched. To be their witness is to be forever changed.

The snow was sloppy beneath my snowshoes Sunday as I stepped away from the house. Following the agricultural ditch that abuts the south woodlot, I climbed over thick tangles of bent cattail stalks and wedged my way beneath low-hanging branches…and I saw cattails at long last giving up their seed. 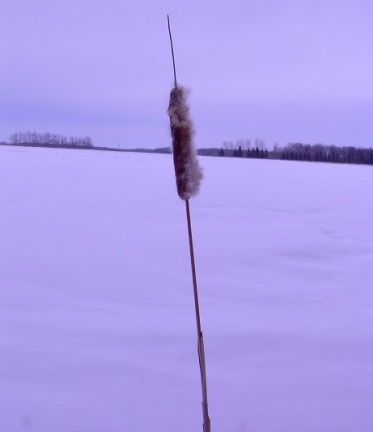